Damn, where can you still go these days? It’s been more than 3 months of lockdown in Berlin and still no sign of any candle light at the end of the tunnel. You can only visit a supermarket, a pharmacy or a cemetery..In that particular order 😀 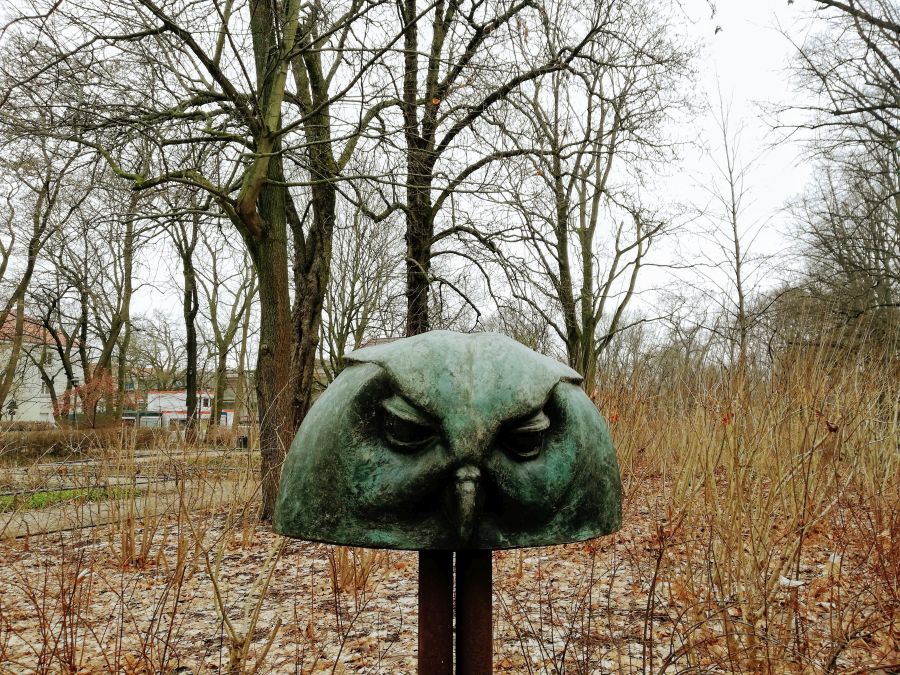 But the truth is there are still ways to scratch your travel itch during lockdown. I mean your time travel itch. For, be honest, with all the social distancing, you’ve been cutting down on your grooming time so badly that you are just one step away from trading your shampoo for a silver head scratcher to chase lice just like Louis XIV in 18th century France. Now that would be a proper cultural immersion.

And there is also the pilgrimage between the kitchen and the bathroom where the Holy Grail is a new roll of toilet paper.. Despite embracing all of this, the other day I told myself :

“Get the hell out of my house! Enough! And no, Kaufland supermarket is not a destination. It should be something new, like Rewe or Edeka :P”

Back to the basics

Still, there must be a way to make a plan. Back to the basics. Use what you have: 2 legs, a bike, Google maps. Yes, yes, use what you have, that is the new mantra. Ok! I found something: I’ll take the Sbahn to this place: Hoppengarten. It starts with “Ho” as in “Hope”. It’s not too far, not too close, it’s.. in the middle. I will be in the middle of something. Hopefully 🙂

Ok, Ostkreuz train stop, don’t confuse me with all these elevators..I have to go up, then down, then up and down. Ups and down, really? What an irony!

Finally, I find my way to the right platform, I am on the train and have a crystal clear plan: I go straight to Hoppengarten, it’s 7 stops away. Wait, did that guy just cough right now, at 2 meters from me? That’s it, change of plans, I get off right here. Where am I? Biesdorf? It sounds good. Maybe not as hopeful as Hoppengarten though 😀

What?! They have a castle here? Oh my god, that’s why I Iike freestyling instead of sticking to plans. Cool, off to the castle, my dear! It’s a pity I am not wearing a ballroom gown.

The Covid-19 butterfly effect and the Pink Castle

Three minutes later I was biking on a long, picturesque alley bordered with huge linden trees which were green..at the bottom. Their bark was covered in green moss. 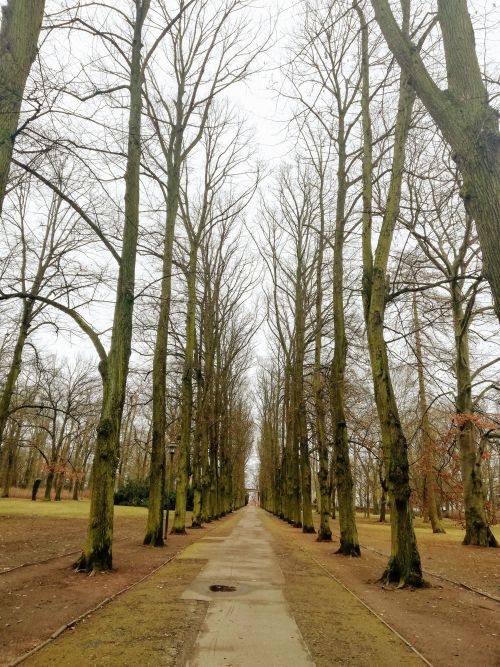 I could finally see some “light” at the end of the tunnel: and the light was pink. The tree tunnel was leading the way to a small pink castle with a fancy tower and Corinthian style columns. 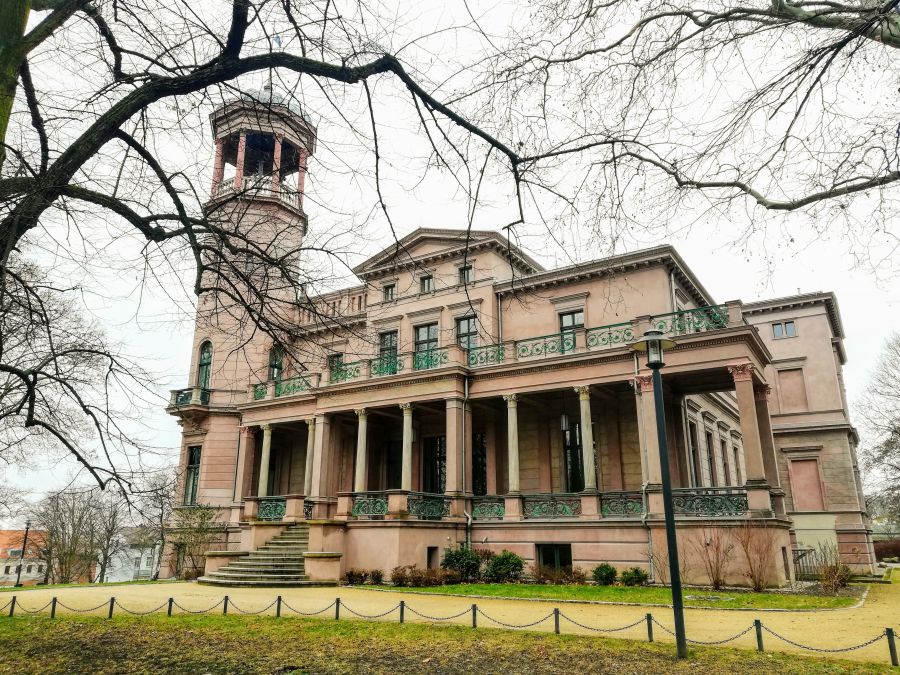 Delightful! What a delightful little castle, an artful hidden gem that I would have never found if that guy hadn’t coughed next to me. The Covid-19 butterfly effect! You know how it goes: a bat flaps its wings in Wuhan and ..the rest is history. I am kidding, of course. The real butterfly effect goes like: Why did you throw the butter out of the window? Because I always wanted to see a butterfly.

The Pleasure Ground: Ice, ice, baby, but bring your own whiskey

The Biesdorf castle is facing an area dubbed Pleasure Ground, “strategically” equipped with a pond, a parasol and a grandiose double staircase leading.. nowhere. I first spent a few good minutes staring at that mausoleum style flight of stairs, asking myself: what is the point of that? I climbed up the stairs: nothing up there, absolutely nothing. Why on earth would someone build some stairs which end up abruptly just like the life of that guy whose last words were: Throw me that axe, please!

Do you really need a full underground icehouse just to get the ice cubes for your daily dose of whiskey on the rocks? How much whiskey can you drink? It’s clear, the owner was a massive alcoholic. I could instantly imagine how the architect who built the castle (Heino Schmieden) managed to land the job.  He just figured out the right sales pitch:

“Yes, Mr. Baron von Rüxleben, I am going to build a castle here but, more importantly, an amazing icehouse with millions of ice cubes for millions of whiskey glasses.”

“Mr. Schmieden, you are a wise man. You are hired!”

And then it hit me: this castle was built in the 19th century: they had no refrigerators then!  So the icehouse is like the ancestor of the refrigerator..Cool. (Finally a situation where this word makes sense 🙂 On a side note, I had never thought of building a flamboyant staircase to camouflage my fridge underneath but now I am considering it.

I had no idea ice was a big business a century ago and countries like Norway thrived on it, selling tons of freshly cut ice cubes. I found it funny though that in the heyday of icetrade, people mostly used straw to insulate the ice reserve.

It seems that you can only rock on ice cubes so much. The Baron von Rüxleben presumably had a meltdown and sold the castle fast. Enter Siemens.

Werner von Siemens: the Elon Musk of the 19th century

Werner von Siemens bought the castle and the surrounding park in 1887. Yes, Siemens was actually a real person, living and breathing in Germany a century ago. I hadn’t really made the association with a human being whenever I heard the name Siemens. It sounds so much like just another corporation name. And the guy’s first name – Werner –  doesn’t do a great humanizing job either. Werner..Very relatable..Ok, Wernie, let’s google you a little and see what skeletons you keep in your closet :))

Wow, I was blown away. This guy was a sort of Elon Musk of the 19th century. A visionary and a creative inventor. He understood the power of electricity and went all in.

I quote from the German Wikipedia: “With the development of the first electric generator (1866) based on the existing dynamo-electric principle, Werner Siemens is one of the pioneers of heavy current technology.

Electrical energy, which could now be produced on a large scale, made it possible to use the flexible electric motor, which, together with the combustion engines, replaced the steam engine and initiated the second industrial revolution.”

Chapeau! It’s a pity that when it comes to famous German people, Hitler is always stealing the show. Alongside Heidi Klum 🙂 And Hitler wasn’t even German, but Austrian. Siemens was by all means a driving force for the progress of humanity. And I don’t know how much public awareness there is around that.

So Wernie has some awesome “skeletons” in his closet:

But to me, the coolest thing he came up with was coating electrical wires 🙂 That’s sophistication, my friend! He created a coating for wires, using Gutta-percha. Gutta-percha! If that’s not the best word you heard today, I don’t know what it is. Just imagine, without Siemens, we would be clinging to our uncoated smartphone cables today sporting forever an electrified porcupine hairstyle.

So, yeah, this was a cool thing. This and turning steel spoons into gold ones. But I’m afraid you’ll have to google that yourself 🙂

The upshot of landscaping in style

I must still add that the beauty of the castle is enhanced by its surrounding park. 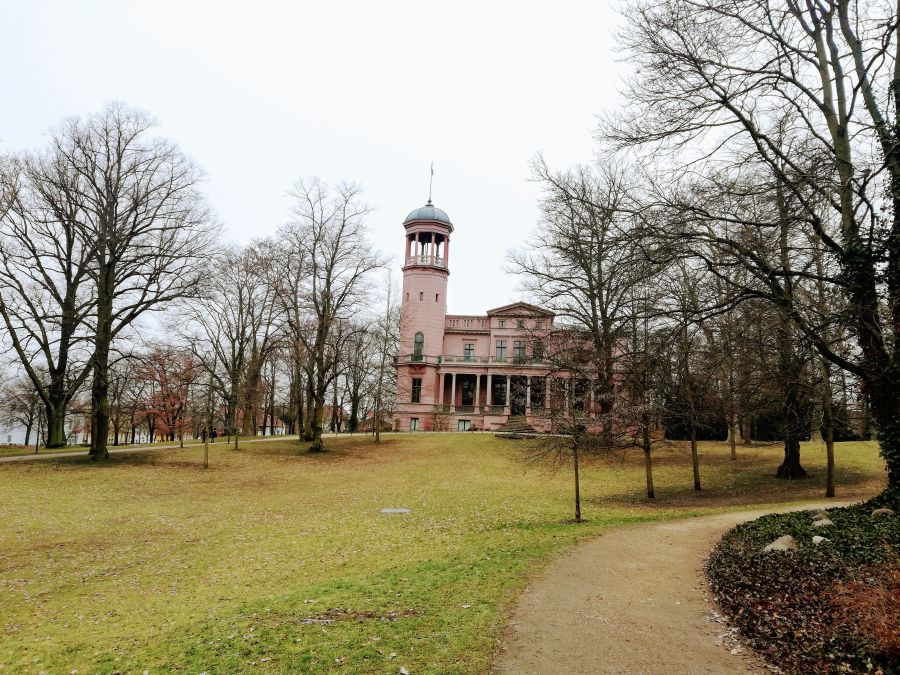 A landscape architect called Albert Broderson did a great job with designing it, “alternating rhythmic sequences of different areas with a beautiful distribution of light and shade and making a skilful use of the existing visual axes.”

I couldn’t help but quote this very intellectual presentation because despite sounding a bit pompous, it’s true. Albert Broderson deserves his title as a Royal Garden Director. Besides, can anyone think of a cooler job title for a Linkedin profile? Hard to imagine..

My accidental trip to the castle in Biesdorf was very educational and esthetically rewarding.

But, in all honesty, the biggest highlight of the experience was me not killing an old lady.

While I was absorbed reading the information board about the castle’s history, I left my bike standing around on its own. Then an old lady walked just half a meter away from it. That was the moment my bike decided to fall on one side. Miraculously, the lady was untouched. Otherwise I would be writing these lines now from behind the bars, bitching about the Covid-19 bat effect.

Quarantining by the River