Medical tourism is that thing where you have to cut through a barbed-wire border fence with your teeth to reach your goal of finally having your teeth fixed abroad, by a blacksmith turned whitesmith turned toothsmith, somewhere near the Krakatoa volcano which is about to erupt .. But, hey, you just saved 5 dollars! Congratulations!

At least, this is how I was doing it so far. But Berlin taught me differently. Here you get to practice medical tourism locally: you get into a fight in the Sbahn and someone fixes your teeth forever, free of charge.. This is, of course, a joke. No, you just go straight to a blacksmith at the other end of the city.

That’s what I actually did on Monday. I had to change the train 3 times and go all the way to Waidmannslust in the North of Berlin and practice my rich dentistry related German vocabulary: AAAAAAA 🙂

10 minutes later I was back on the train, heading home. Great! Except, after a while I noticed the landscape didn’t look quite familiar. Surprise! I had taken the Ring Bahn counterclockwise. The Ring Bahn goes full circle so I didn’t bother to get off. I was going to get home anyway, just with a delay.

I opened Google maps to follow the train’s path and see where the hell I was.

I was in Witzleben!

What?! Where? Witzleben literally means Joke Life! What, that exists in Germany?! It’s like I found a rabbit hole and ended in the epicenter of humour in Germany? It’s already another dimension. I have to get off here and see what is going on. So I stopped in Witzleben which is a real neighborhood in West Berlin and includes the Lietzenseepark. The only joke was that “Witzleben” is the real name of a General and Minister of War at the beginning of the 19th century who owned the whole place. And this name is a noble German name, first documented in the 10th century! So, we are talking a millennia of joke lives in the most serious country ever. Impressive!

On Tuesday, I did it again! I persevered in my dentistry adventure. And this time the dentist had such a good hearted attitude and seemed to fully possess a good soul and genuine kindness that one felt like hugging him. Yes, in Germany! But by its accent, you could see he was an Italian immigrant turned blacksmith turned whitesmith turned gunsmith..:P

And this profoundly humane vibe got to me, all the way to my subconscious I think, because I left feeling like my right side of the brain completely took over – and I was possessed by an overwhelming feeling of love for humanity, nature and even trash cans which only a major participant in Woodstock must have experienced after a ton of narcotics.

Hmm..I was walking and smiling, floating. The world was a friendly place, not a harsh place where people are spitting rough consonants at you in a language you’ll never master. Having your guard up all the time is fucking exhausting! Tears came to my eyes.

I stopped. There was a big window to my right and summer was calling from inside. A big bookstore window, where someone had taken the time to carefully arrange a few books and things which would transport you instantly in a summertime mood. 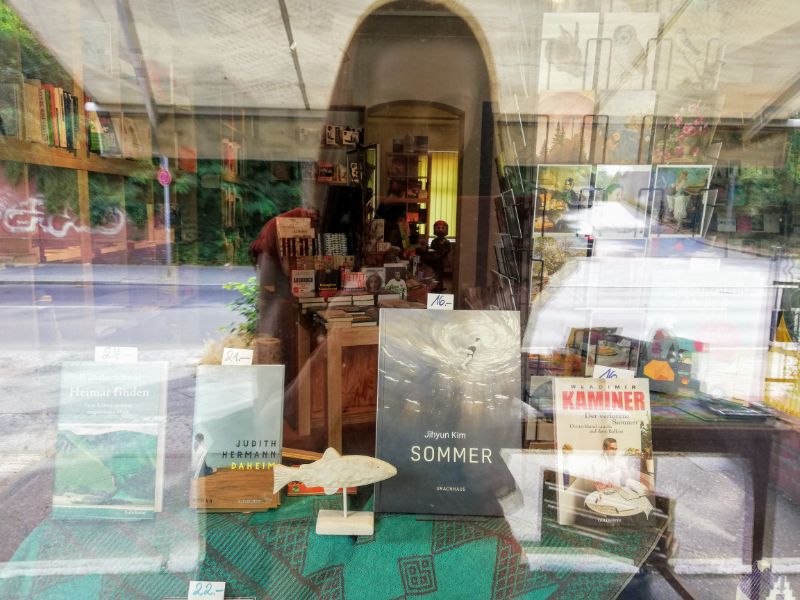 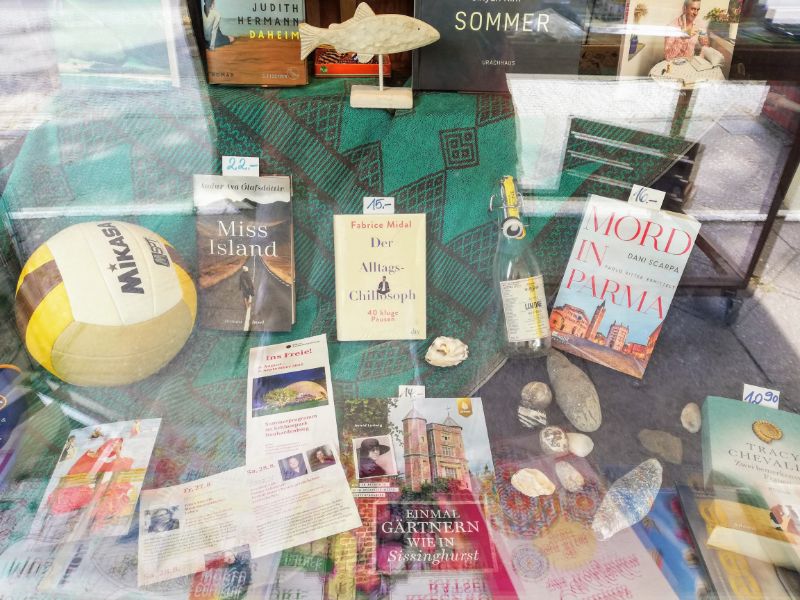 A cute aesthetic! I had to see that window to finally realize: hey, it’s summer, I should enjoy it!

So I bought a Marmorkuchen and went to the nearest park: Steinbergpark. But, oh my God, what a park that is! When you enter it, it’s like stepping into a sanctuary of freshness and lush greenery. The trees are huge and the leafage is so dense it creates a giant cocoon buffering the hustle and bustle of the outside world. This is more than a park. It’s a piece of a genuine forest, like a reminiscence of a wild, untouched, unending primal woodland. And it has a waterfall too. And this is how I enjoyed a full therapeutic program by being an accidental medical tourist without transgressing any spikey border lines. I still saved 5 dollars 🙂

PS: Waidmannslust literally means Hunter’s Delight. This former village is now part of Berlin and was created by a guy who was a forester and owned an inn called Waidmannslust. The settlement used to be called a villenkolonie, that is a villa colony 🙂 No wonder, here’s an average looking house in this area: 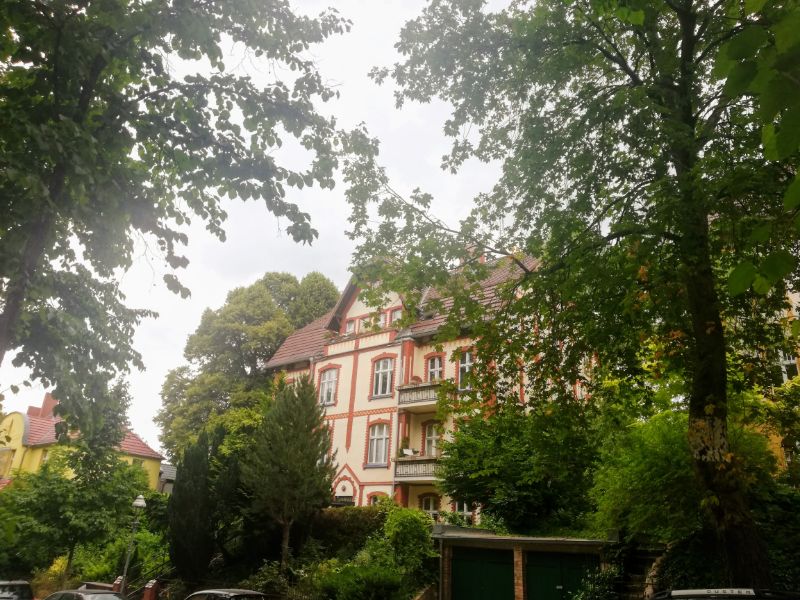 Quarantining by the River