I woke up watching the sun shining.. on the building across the street.

It was 9.30 and I knew exactly what lay ahead of me: an entire day of watching the sun shining on my neighbours’ windows while completely avoiding mine. Reason for me to bitch again about that asshole “sun of a bitch.”

My apartment faces North. That means I get no direct sunlight but I do get to see how our neighbours enjoy sunbathing on their balconies, smirking at me and secretly thinking:  no sun for you, sucker!

Day after day after day, I feel like a Capuchin monk visiting the Red Light District in Amsterdam. Just like him, I can watch but I can’t touch.

But hey, today is Sunday! It’s a brunch day.”

Sunday brunches are quite popular in Berlin nowadays.

A brunch is basically an all-you-can-eat buffet where you can compensate for missing some of your breakfast and lunch meals throughout the week. Particularly those you missed on Monday, Tuesday, Wednesday, Thursday, Friday and Saturday.

So here’s your Sunday chance to make a public demonstration of how an inflatable elephant works.

“That’s not a problem. I check out some food blogs and then I pick the best place.  Easy peasy.”

Two hours later I was still comparing and reading reviews..

And I was starting to feel a very specific type of headache: the “too much choice will kill you headache”. And by that I don’t mean dying a noble death, Titanic style, with DiCaprio drowning frozen in the Ocean to save Kate.

I mean a different type of death by drowning: at home, in your own bathtub, because your soap smelled so nice that you had to taste it.

“Maybe a brunch in Congo could simplify things a little.”

A few stops with the M1 tram and I was there.

It was just me. At the back of a long queue, a few dozen people who’d all decided, at the same time, they are in the mood for wonders. That was already a big wonder, right there.

The queue was not your typical organized and disciplined German queue.

It looked rather like a human Brownian motion with a hipsterish twist. Each particle was waiting, while also doing something else: painting its nails with Smurf blue polish, striking a yoga pose, miming a fish with a high IQ, preparing a syringe of crack..

It was a perfect sample of the multi culti face of contemporary Berlin. People were spread out in the hallway, laid-back, standing or sitting, waiting for their turn to grab a seat at the House of Wonder.

The whole wonder brunch operation was located upstairs. I climbed up a cute spiral staircase. 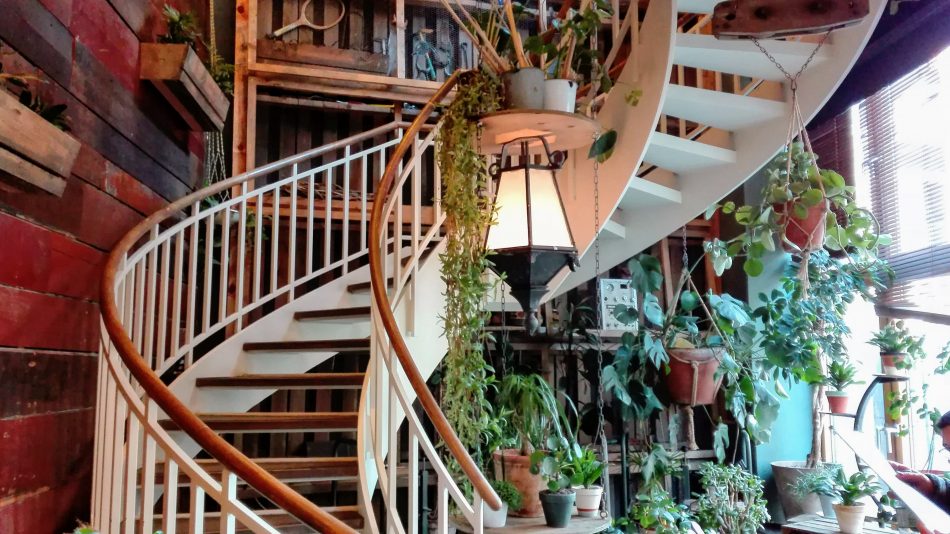 The tables were all occupied and there was no sunlight in the room. Now that was something to wonder about.

“And what’s the deal with those brooms and tools hanging there on the wall? Is that a code for: don’t worry if you can’t pay the bill, we need help around here anyway.” 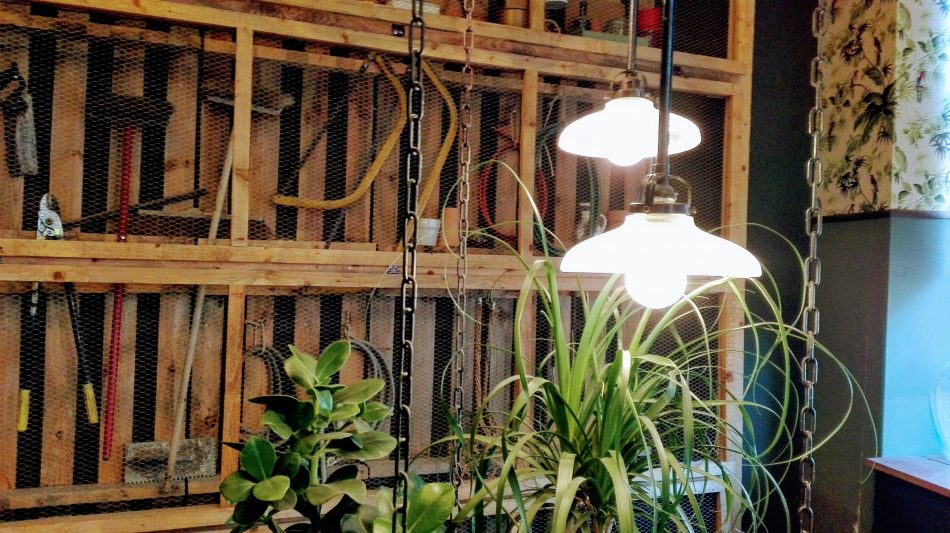 It was a pleasure to walk in the embrace of sunlight. And you could almost forget that even your teeth and fillings were freezing. It was -5°C outside.

“Wait a minute, what’s that? A bear and a red carpet?”

It was the red carpet at Friedrichstadtpalast for the Berlin Film Festival’s closing ceremony. Niiice!

“But, wait, why does it look so trashy?”

The glorious red carpet was covered in dust and dirt. The closing ceremony had already taken place, the evening before, on Saturday. So a herd of movie stars had trampled it  and ruined its virgin-red purity.

I fooled around a little, parading on the sullied red carpet. Which is basically the equivalent of marrying a retired prostitute.

I went further and reached the Weidendammer Brücke bridge on the Spree River, not far from the Berlin Friedrichstrasse train station.

The Spree’s water was clean enough to see through it.

If you look carefully from the bridge, you can spot some objects on the bottom of the river. So what’s there?

Ha! Easy to imagine how that happened. Everyone knows that moment of crisis during a pub crawl, when you run out of ideas for where to go next and then the herpetologist of the group says “My frog knows a place!” And the party moves to the bottom of a river.

I continued my walk on the right side of the Spree, on Schiffbauerdamm Street. It was already past 1 o’clock and this “searching for a sunny brunch” operation was starting to make me really hangry.

“Look, over there, a tiny sunny French restaurant. Let me see the menu! What?! Two guillotined escargots for 50 bucks?”

But a sign from the sky instantly reassured me: 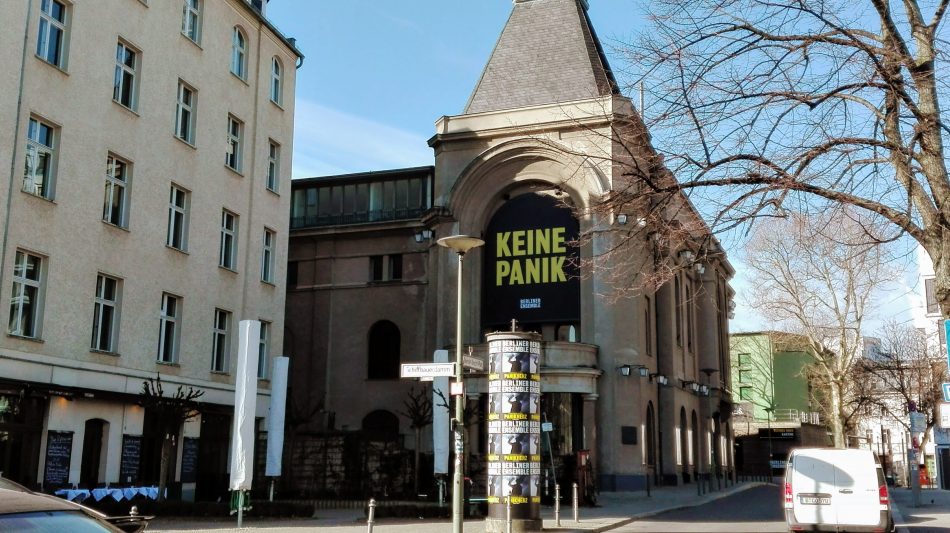 Just a few meters away, there was a German food restaurant: Berliner Republik.

If German and French food were two nude portraits, the first would be a Rubens and the latter a white canvas with a splash of Ratatouille and a flamboyant title: “Nakedity In All Its Infinity!!!”

I went inside Berliner Republik and sat down at a table by the window, finally warming up my frozen bones. I was as happy as a child. But I was acting more like a sunflower, turning my head as much as possible towards the window. 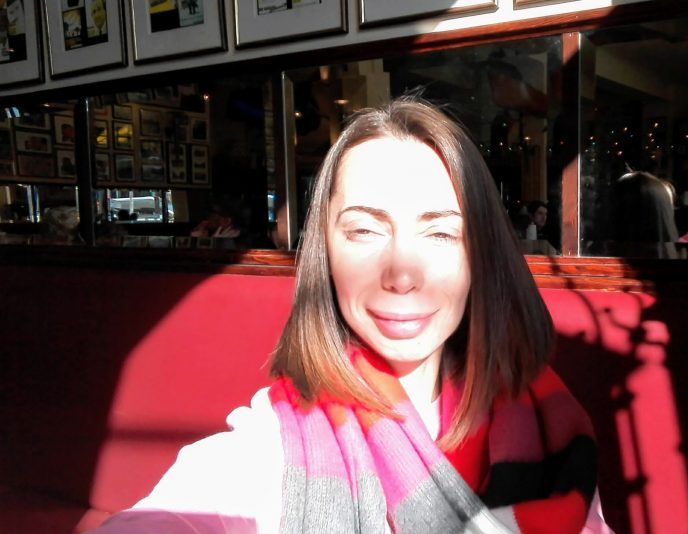 The restaurant looked like it had once witnessed a Guinness book competition named “Who can drink 100 shots in 1 minute” followed by another one called “Who can hang more pictures on the walls in 1 minute”. In exactly this order. 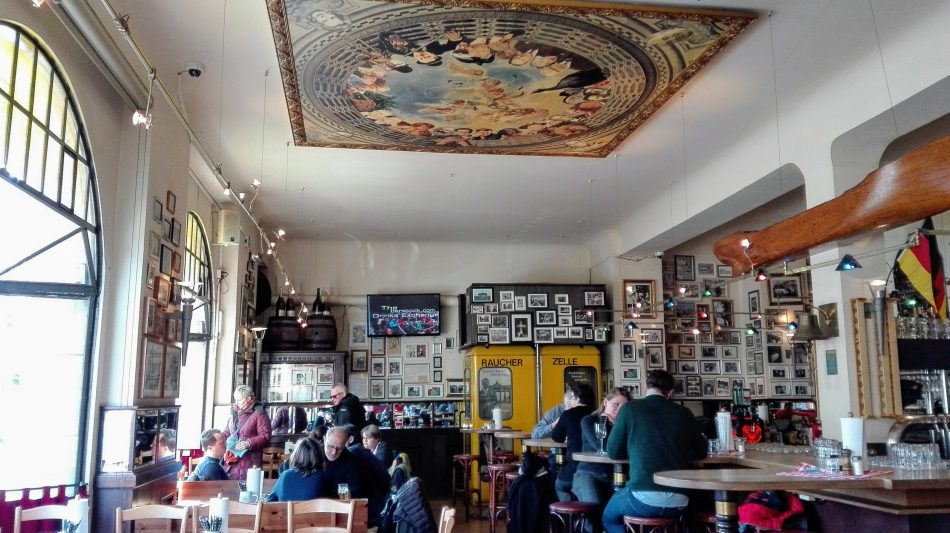 I don’t think I’ve seen more random pictures on the walls in my whole life. Close to the entrance there was an old phone booth turned into a smokers’ area and tagged, “Smoking can be lethal, but so is swimming.”

I ordered Eisbein, knowing very well what to expect.

But, even though I was both physically and psychologically prepared for the experience, when the waiter brought the Eisbein, I looked like a crocodile at the dentist.

This was’t the regular dish I knew. This Eisbein should have been carried like Cleopatra on a golden litter. 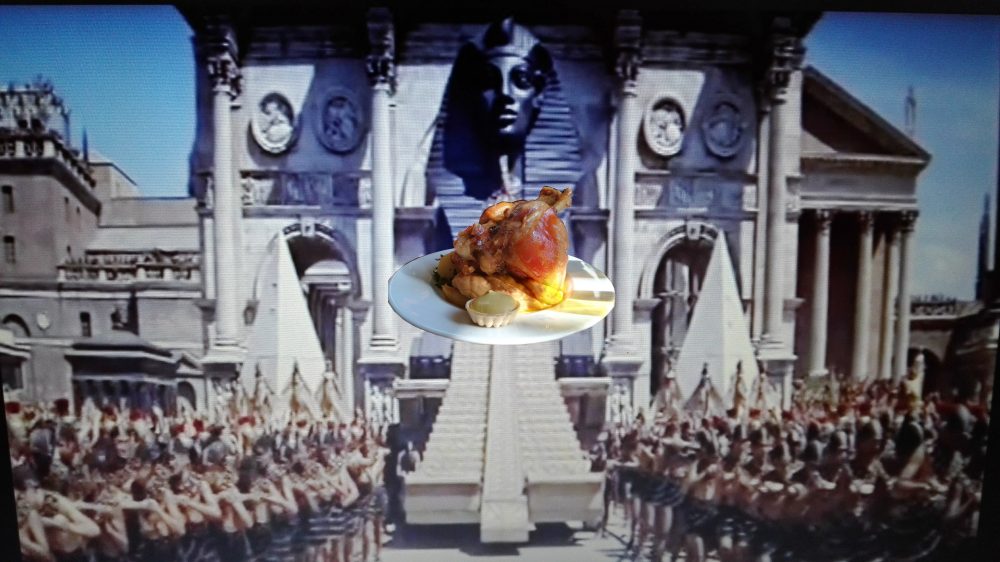 It was huge and you could worship it. Or use it for a NATO emergency food operation in Africa. 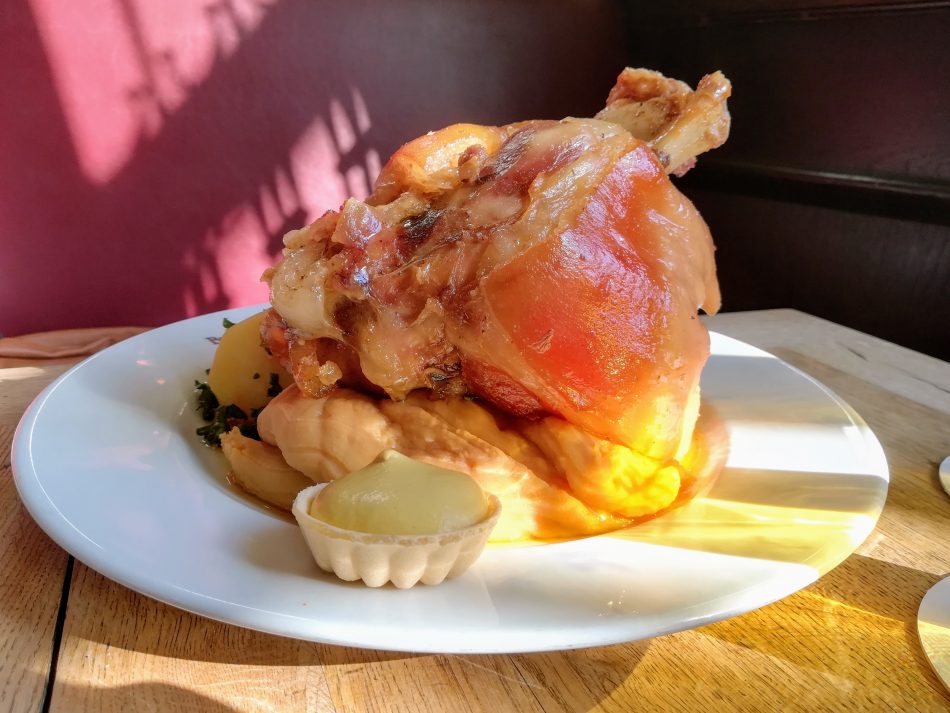